Due to the location on the River Main, Frankfurt features incredibly beautiful landscapes and rich nature. In the numerous parks and squares of Frankfurt, even in the heart of the city, you can find plenty of places for entertainment and just for relaxing in nature. Admirers of a healthy lifestyle will enjoy roller skating and bicycling along the picturesque banks of the Main River. The fans of leisurely walks in the fresh air can walk along the paths of the urban forest park. In addition, connoisseurs of flora and fauna, and just common tourists can head to the botanical garden and the city zoo.

So, you can choose your own green oasis among the most charming natural sights of Frankfurt…

Despite the fact that this place is called Palm Garden, its territory presents many other interesting trees and plants. The basis of the botanical garden collection is tropical plants. Especially for protection from the cold of these heat-loving plants, a large-scale construction of steel and glass (Palmenhaus) was built. Getting into Palmenhaus, the visitor finds himself in a real tropical jungle. 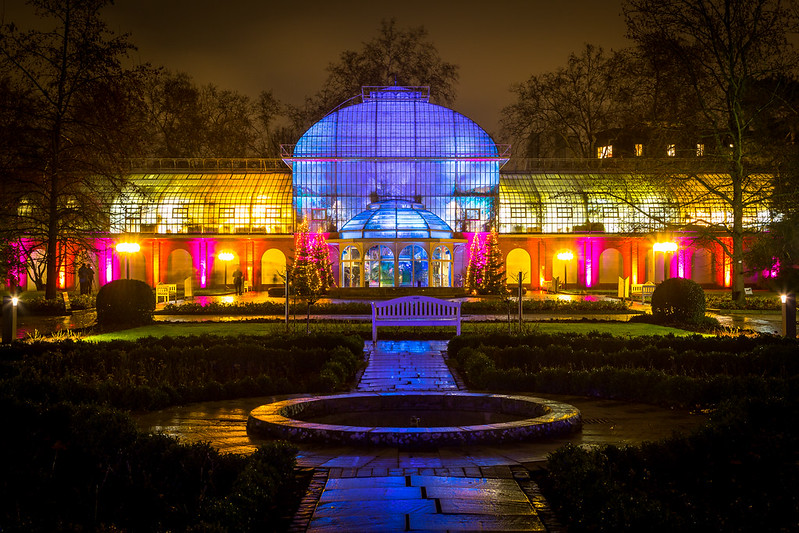 Another feature of the site is the availability of a dividing into climatic zones, which gives you the opportunity to see what grows not only in the rainforests, but also in colder places of our planet.

Cacti collected from different parts of the world, trees of incredible height, bright and fragrant flowers, and, of course, hundreds of species of palm trees await you in this truly incredible oasis of wildlife located in the heart of the European metropolis.

Frankfurt Zoo is a place where you can see a huge number of species of birds, reptiles and mammals. On the spacious territory of the zoo there are about 4,500 representatives of over 450 species of animals. On a neat, clean and very well-groomed territory of 13 hectares animals, birds and amphibians live either in well-equipped pavilions or in open areas.

The land of the zoo is divided into several thematic zones, including dense jungle, where wild felids of the cat family live, a pavilion with night animals and birds (bats, owls, hedgehogs, jerboas, etc.), premises with primates, exotarium, inhabited with amphibians, reptiles and a variety of fish, as well as pools with penguins and seals. 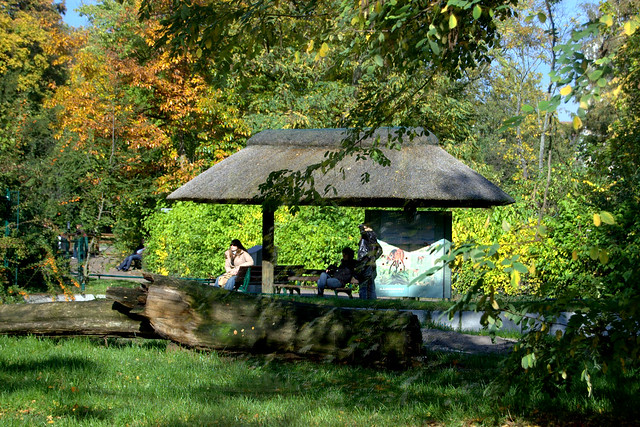 You won’t find a single lattice there – there are only small yards where representatives of the fauna feel very comfortable. That’s why the animals of the zoo don’t hide in the houses: they are always active and very inquisitive. Herons, ducks, geese, pheasants and other birds freely walk and fly through the territory of the zoo.

Walking around the green territory of Frankfurt Zoo you will also see powerful rhinos and hippopotami, camels, lamas, striped zebras, horned antelopes and other equally worthy representatives of the modern animal world.

Bethmann dynasty, which was engaged in banking and was famous for its love to luxury, built a magnificent palace on this place, around which an equally beautiful park was created.

You can enjoy there an infinite quantity of greenery, fresh air, as well as an atmosphere of relaxation and solitude. Small benches and paths leading through the gardens make this place truly unique. The decoration and its central part is a small Chinese garden, where plants, flowers, and pagoda are located in full accordance with Feng Shui. 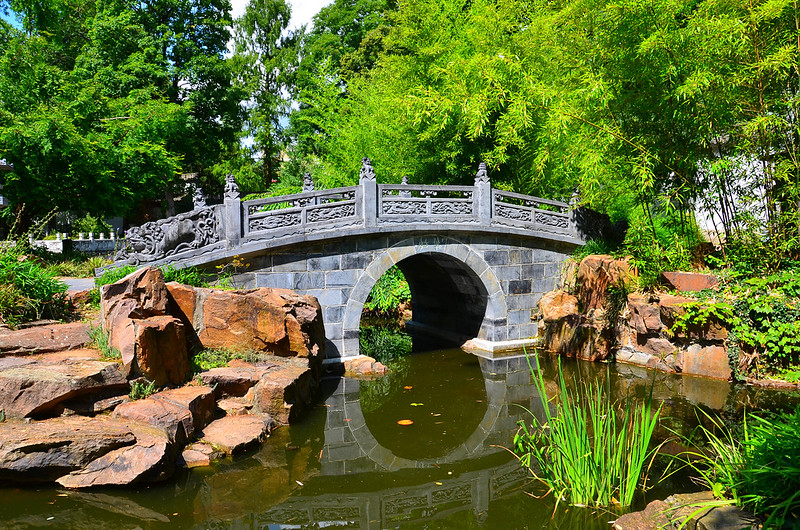 From the noise of the metropolis the park is separated by thick ancient walls. A riot of colors on the well-kept flower beds and unique flowering bushes make Bethmann Park look like the most prestigious resorts in Germany.

For the visitors of the park guided tours and plant care consultations are provided.

Rothschild is one of the oldest parks in Frankfurt and it has undergone significant changes in its two hundred year history.

As early as the 18th century, the well-known banker Mayer Rothschild bought the land in this place in order to build a grand palace for the summer pastime. To make the rest more enjoyable, it was decided to improve all the surrounding territory. As a result, the park arose in this place. 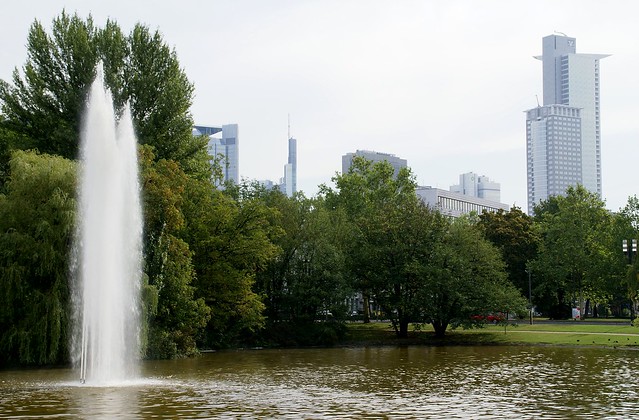 Unfortunately, the building didn’t survive in the bloody World War 2, but the green plantation still pleases the eyes of not only tourists but the local. There’s a beautiful lake, modern playgrounds, as well as benches and paths for leisurely walks.

Nizza is a park in Frankfurt with the area of ​​4.5 acres, which runs along the northern bank of the Main River. This wonderful park is one of the largest green territories to the north of the Alps. 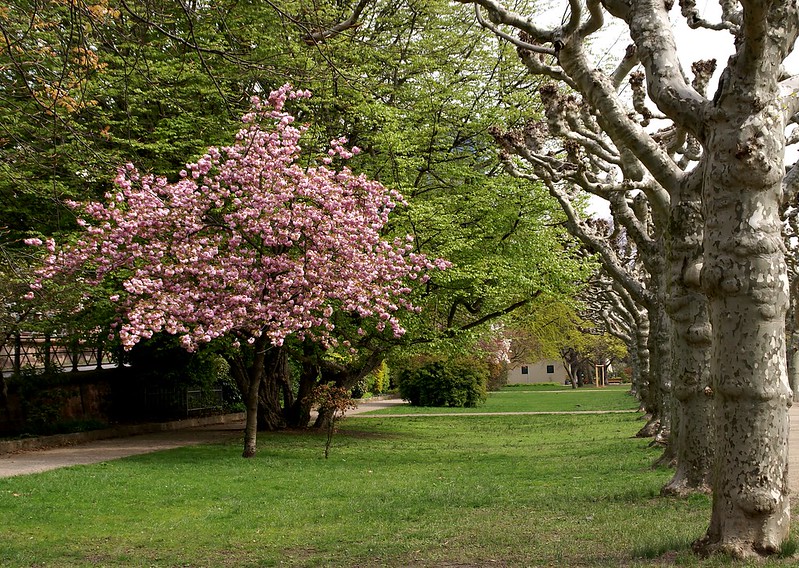 The name of the park comes from the French city of Nice, famous for its mild climate, a wind-protected territory, and bright sunlight all year round. Nizza Park features many plants of Mediterranean flora reminding the gardens of the French Riviera.

After the transformation of the park by the city government, 2000 hardy Mediterranean plants that don’t require wintering in the greenhouse were brought and planted.

In the park you can admire the beautiful Mediterranean palm trees, fig trees, lemon trees and Mediterranean plants. Thanks to the walls and the reflected sunlight from the river, exotic plants can thrive in a favorable microclimate.

Frankfurt is the place where a great selection of natural sights is concentrated. Local parks, gardens and zoos offer perfect conditions for relaxing after a busy day. While being in Frankfurt, don’t miss a chance to rent a car at Frankfurt Airport, and spend several relaxing hours in one of the local ‘green oases’.